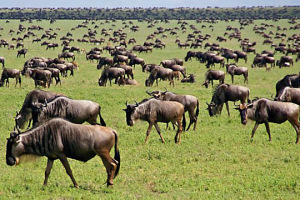 The Serengeti is undoubtedly the best national park in the north. Bordering the Masaai Mara in Kenya, the Tanzania side is far less touristy and its sheer size means it is possible to spend a long time here without getting bored. Most clients spend from 3 to 5 nights in the Serengeti alone.

The Serengeti is justifiably famous for its huge concentrations of the game especially the predators (lion, leopard, and cheetah) and of course the migration at certain times of the year.

Wildebeest Migration is a dramatic story. It takes place within Kenya and Tanzania and is the greatest wildlife show on earth. Between the open plains of the Serengeti and the Masai Mara, thousands of wildebeest and zebras migrate to greener pastures as the season’s change and the circle of life and death continues. Predators follow the Wildebeest Migration closely, waiting for an opportunity to strike weak prey as they make their way into different territories.

The precise timing of the Wildebeest Migration changes annually and it is a very unpredictable and spontaneous natural event. The calving season takes place in the Serengeti between the months of January and mid-March before the Wildebeest Migration begins heading towards the western Serengeti in June. The best time to see the migration is usually between June and August when the wildebeest congregate and prepare to cross the famous Grumeti River.

There are a few excellent camps in this area where you can stay to witness this natural phenomenon. If you are in the Masai Mara you can expect the wildebeest to make their arrival as early as July, but they generally arrive between August and September and remain in the Mara between October and November. Between December and January, the wildebeest gradually begin their migration back towards the Serengeti.

Driving time from the Ngorongoro Crater is about 6 tours Serengeti With more than 4 million mammals, among them wildebeests, Thomson-gazelles, zebras, impalas, topes, buffaloes, Grants- Gazelles, giraffes, and warthogs, Serengeti is an excellent park for Game viewing. Every year in May or June, zebras and wildebeest Carpet the northern Serengeti, undertaking a circuit of 100km as They thunder westwards searching for new pastures, waterholes and Young grass o the park corridor.

Predators prowl the plains, and Serengeti is the only place where one can witness this annual Movement, also called “The race for life”.The vast grass fields make Serengeti a paradise for predators. There are most hyenas, but the national park is especially known for its Lions, and you should be very out of luck not to capture quite a few Lions on camera while you are in the park, even the black manned male lions.

The first thing you spot after the drive-in at Naabi Hill is a vast, flat Area of short grass, not a tree in sight for miles. As you approach Seronera in the center of the park, the grass is long and there are plenty of acacia trees to be seen on the savanna. The Distance from Arusha is 320 km, and the drive takes around 7 hours. You can also fly directly to the small air stripe at Seronera.

The best time to see this park is between December and May when the wildebeest migration is in the south, and if you are lucky, you Will catch the annual movement of wildebeest and zebras towards Masai Mara in Kenya.>> Book Now Your Safri 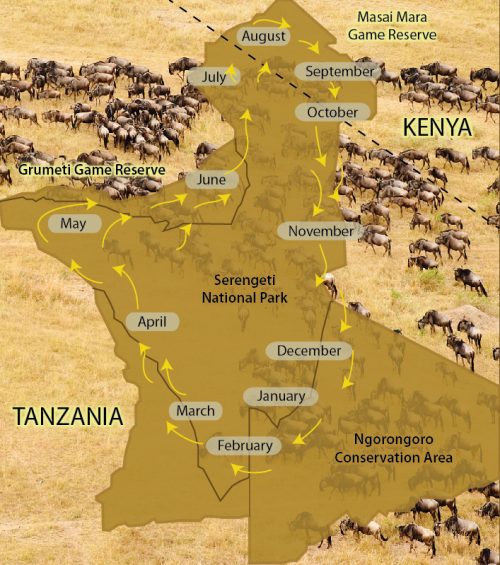